JFigure
In stock @ JFigure.com (¥21,900)
Condition: pre-owned A/B. The box is opened and damaged. The figure is overall in good condition. Parts complete.
1 day agoSponsored by JFigure.com

Tiamat26
Selling this beauty as I am downsizing almost the entire collection. Thats what happens when you see that your time on this earth is just but a fleeting passage. 2022 was a terrible year for me health wise. Enough with the bad stuff now here is your opportunity to own this figurine. Please look at my profile and see comments from people that I have sold items to. I accept Direct transfers as well as Friends and Family from Paypal. I package the death out of the original boxes, I get insurance and tracking to protect both Seller and buyer. I can send pictures to facilitate the sale. Dm me or chat on Discord ( Aurora sixx #5013 ).

sailoroma
looking to buy for 170 euros
3 months ago

EscanorSama
FINALLY GOT HER, GRAIL OBTAINED!!
I got her for 18k yen!
4 months ago

sharkfigs
Looking for her
9 months ago

HijikataCloud
Demigod_Dan • 2 years ago • #77784475With so many owners and shops having her in stock, her price not dropping off is one of the figure world's greatest mysteries to me. It's not like the quality is so good that it still rivals the 1/7 figures released nowadays either...

You really have to have her in hand to know why this is so. So many things to like about her:
1. Simple pose but her presence is such that she doesn't need any other figure to complement her. In fact I think she displays best on her own.
2. Maid outfit done right.
3. Doesn't take up too much space.
4. Added display "feature". Displaying her in this mode doesn't seem overly vulgar because of the pose and her expression. Plus you wouldn't know she had this feature if you didn't already know.
5. Her body sculpt is just so well-proportioned.
6. Because OrchidSeed.
7. Because she doesn't have many figures of her around and I doubt any would top this.
8. Fits in with any of your maid, goth, sexy figs. So versatile for so many genres.
9. Succubus rule the figure world.

I still haven't taken her out of the box to display. She's just as beautiful inside her box, she's like the most precious thing you tuck away and appreciate anytime. Safe to say she's the best figure I've owned.
10 months ago

Deltaisnice
anyones has for sale?
1 year ago
View more comments 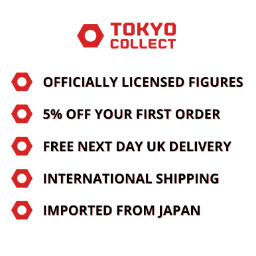